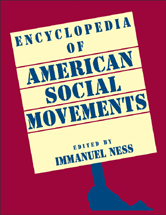 This four-volume set examines every significant social movement in American history, covering each movement's goals, tactics, and impact, as well as its successes and failures.