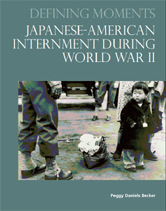 Defining Moments: Japanese-American Internment during World War II provides a detailed and authoritative overview of internment, one of the most controversial aspects of Americas otherwise triumphant intervention in World War II.