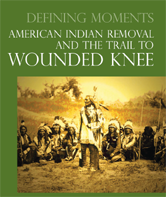 Provides a detailed account of American Indian Removal policy and its culmination at the massacre at Wounded Knee, including its social and political legacy in modern America. Includes a narrative overview, biographies, primary source documents, and other helpful features.