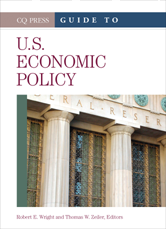 Guide to U.S. Economic Policy shows students and researchers how issues and actions are translated into public policies for resolving economic problems (like the Great Recession) or managing economic conflict (like the left-right ideological split over the role of government regulation in markets).