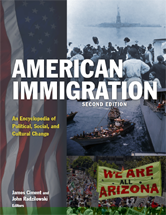 American Immigration: An Encyclopedia of Political, Social, and Cultural Change

American Immigration: An Encyclopedia of Political, Social, and Cultural Change

Thoroughly revised and expanded, this is the definitive reference on American immigration from both historic and contemporary perspectives. It traces the scope and sweep of U.S. immigration from the earliest settlements to the present, providing a comprehensive, multidisciplinary approach to all aspects of this critically important subject.