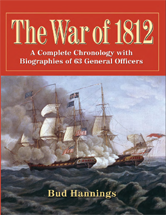 This major reference work offers a comprehensive day-by-day chronology of the War of 1812, including its slow build-up and aftermath, and provides detailed biographies of the generals who made their marks.