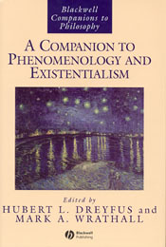 Blackwell Companions to Philosophy: A Companion to Phenomenology and Existentialism

Blackwell Companions to Philosophy: A Companion to Phenomenology and Existentialism

A Companion to Phenomenology and Existentialism is a complete guide to two of the dominant movements of philosophy in the twentieth century. - Written by a team of leading scholars, including Dagfinn FÃ¸llesdal, J. N. Mohanty, Robert Solomon, Jean-Luc Marion - Highlights the area of overlap between the two movements - Features longer essays discussing each of the main schools of thought, shorter essays introducing prominent themes, and problem-oriented chapters - Organised topically, around concepts such as temporality, intentionality, death and nihilism - Features essays on unusual subjects, such as medicine, the emotions, artificial intelligence, and environmental philosophy