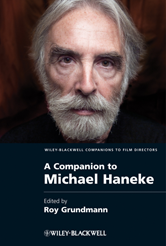 Wiley-Blackwell Companions to Film Directors: A Companion to Michael Haneke

Wiley-Blackwell Companions to Film Directors: A Companion to Michael Haneke

A Companion to Michael Haneke is a definitive collection of newly-commissioned work that covers Haneke's body of work in its entirety, catering to students and scholars of Haneke at a time when interest in the director and his work is soaring. Introduces one of the most important directors to have emerged on the global cinema scene in the past fifteen years. Includes exclusive interviews with Michael Haneke, including an interview discussion of his most recent film, The White Ribbon. Considers themes, topics, and subjects that have formed the nucleus of the director's life's work: the fate of European cinema, Haneke in Hollywood, pornography, alienation, citizenship, colonialism, and the gaze of surveillanceFeatures critical examinations of La Pianiste, Time of the Wolf, Three Paths to the Lake, and CachÃ©, amongst others.