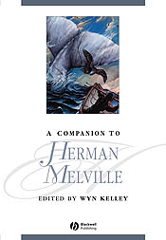 Blackwell Companions to Literature and Culture: A Companion to Herman Melville

Blackwell Companions to Literature and Culture: A Companion to Herman Melville

In a series of original essays, this companion demonstrates the relevance of Melvilleâs works in the twenty-first century. - Presents original essays by scholars from around the world, representing a range of different approaches to Melville - Considers Melville in a global context, and looks at the impact of global economies and technologies on the way people read Melville - Takes account of the latest and most sophisticated scholarship, including postcolonial and feminist perspectives - Locates Melville in his cultural milieu, revising our views of his politics on race, gender and democracy - Reveals Melville as a more contemporary writer than his critics have sometimes assumed