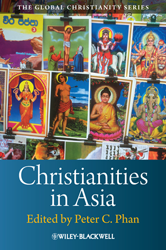 Christianity in Asia explores the history, development, and current state of Christianity across the worldâs largest and most populous continent. - Offers detailed coverage of the growth of Christianity within South Asia; among the thousands of islands comprising Southeast Asia; and across countries whose Christian origins were historically linked, including Vietnam, Thailand, China, Hong Kong, Taiwan, Japan, and Korea - Brings together a truly international team of contributors, many of whom are natives of the countries they are writing about - Considers the Middle Eastern countries whose Christian roots are deepest, yet have turbulent histories and uncertain futures - Explores the ways in which Christians in Asian countries have received and transformed Christianity into their local or indigenous religion - Shows Christianity to be a vibrant contemporary movement in many Asian countries, despite its comparatively minority status in these regions