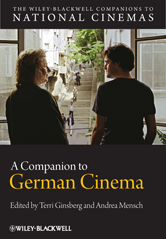 The Wiley-Blackwell Companions to National Cinemas: A Companion to German Cinema

The Wiley-Blackwell Companions to National Cinemas: A Companion to German Cinema

A Companion to German Cinema offers a wide-ranging collection of essays demonstrating state-of-play scholarship on German cinema at a time during which cinema studies as well as German cinema have once again begun to flourish. - Offers a careful combination of theoretical rigor, conceptual accessibility, and intellectual inclusiveness - Includes essays by well-known writers as well as up-and-coming scholars who take innovative critical approaches to both time-honored and emergent areas in the field, especially regarding race, gender, sexuality, and (trans)nationalism - Distinctive for its contemporary relevance, reorienting the field to the global twenty-first century -Fills critical gaps in the extant scholarship, opening the field onto new terrains of critical engagement