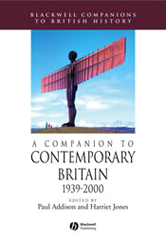 Blackwell Companions to British History: A Companion to Contemporary Britain: 1939-2000

Blackwell Companions to British History: A Companion to Contemporary Britain: 1939-2000

A Companion to Contemporary Britain covers the key themes and debates of 20th-century history from the outbreak of the Second World War to the end of the century. - Assesses the impact of the Second World War - Looks at Britainâs role in the wider world, including the legacy of Empire, Britainâs âspecial relationshipâ with the United States, and integration with continental Europe - Explores cultural issues, such as class consciousness, immigration and race relations, changing gender roles, and the impact of the mass media - Covers domestic politics and the economy - Introduces the varied perspectives dominating historical writing on this period - Identifies the key issues which are likely to fuel future debate