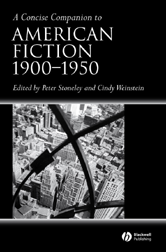 An authoritative guide to American literature, this Companion examines the experimental forms, socio-cultural changes, literary movements, and major authors of the early 20th century. - Considers commonly studied authors such as Faulkner, Fitzgerald, and Hemingway, alongside key texts of the period by Richard Wright, Charles Chesnutt, Zora Neale Hurston, and Anzia Yezierska - Examines how the works of these diverse writers have been interpreted in their own day and how current readings have expanded our understanding of their cultural and literary significance - Covers a broad range of topics, including the First and Second World Wars, literary language differences, author celebrity, the urban landscape, modernism, the Jazz Age, the Great Depression, regionalism, and African-American fiction