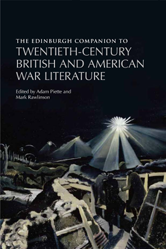 The Edinburgh Companion to Twentieth-Century British and American War Literature

The Edinburgh Companion to Twentieth-Century British and American War Literature

The first reference to literary and cultural representations of war in 20th-century English & US literature and film. Covering the two World Wars, the Spanish Civil War, the Cold War, the Vietnam War, the Troubles in Northern Ireland and the War on Terror, this Companion reveals the influence of modern wars on the imagination.These newly researched and innovative essays connect 'high' literary studies to the engagement of film and theatre with warfare, extensively covers the literary and cultural evaluation of the technologies of war and open the literary field to genre fiction.