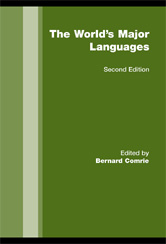 Written by experts in the field, the chapters features over fifty of the world's languages and language families. The featured languages have been chosen based on the number of speakers, their role as official languages and their cultural and historical importance.