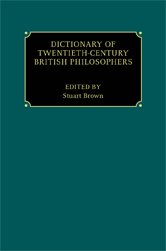 This title contains entries on individuals who made some contribution to philosophy in the twentieth century, including both prolific writers or in some cases writers of no more than a book. "Dictionary of Twentieth-Century British Philosophers" should be of interest both to the general reader who wants to find out about British philosophy of the period and also that they should serve as starting points for those who want to make a further study of individual philosophers.