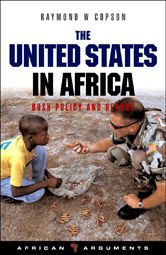 African Arguments: The United States in Africa: Bush Policy and Beyond

African Arguments: The United States in Africa: Bush Policy and Beyond

Though aid has increased and a major AIDS initiative launched, Copson argues that US policy in Africa falls well short of meeting reasonable standards of fairness or justice. Foreign aid is losing its focus on development as political priorities come to the fore; U.S. barriers to African exports remain substantial; and the AIDS program is in danger of flagging due to unilateralism and ideological controversy. An increasingly military approach to fighting the 'Global War on Terror' in Africa and securing energy imports carries serious risks for the region. Copson concludes by assessing the prospects of a more equitable policy emerging in future administrations.