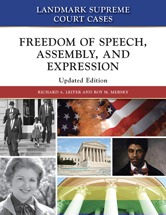 This eBook contains concise, straightforward summaries, analyzing and explaining groundbreaking court cases on the issues of freedom of speech, assembly, and expression.