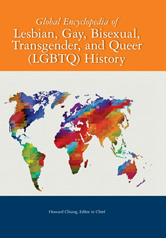 The Global Encyclopedia of Lesbian, Gay, Bisexual, and Transgender History provides a global view of the history of LGBTQ, covering significant figures and events worldwide. Wide-ranging in scope, this encyclopedia complements courses in a variety of disciplines, including history, American studies, literature, psychology, sociology and others.