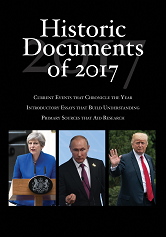 Historic Documents is renowned for the well-written and informative background, history, and context it provides for each document. Each volume begins with an insightful essay that sets the year's events in context, and each document or group of documents is preceded by a comprehensive introduction that provides background information on the event.