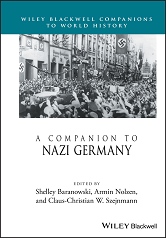 A Companion to Nazi Germany addresses crucial questions with historical insight from the Nazi Party's emergence in the 1920s through its postwar repercussions. From the theory and context that gave rise to the movement, through its structural, cultural, economic, and social impacts, to the era's lasting legacy, this book offers an in-depth examination of modern history's most infamous reign.