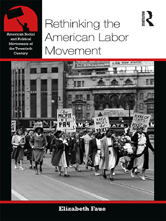 Elizabeth Faue reconsiders the varied strains of the labor movement, situating them within the context of rapidly transforming twentieth-century American society to show how these efforts have formed a political and social movement that has shaped the trajectory of American life. Rethinking the American Labor Movement is indispensable reading for scholars and students interested in American labor in the twentieth century and in the interplay between labor, wealth, and power.