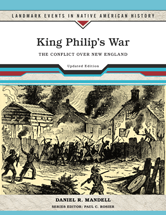 King Philip's War, Updated Edition is a penetrating account of this decisive confrontation, which ultimately led to the end of native independence in the new English colonies.