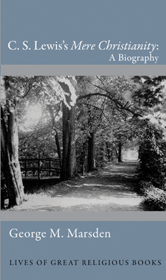 George Marsden describes how Lewis gradually went from being an atheist to a committed Anglican--famously converting to Christianity in 1931 after conversing into the night with his friends J. R. R. Tolkien and Hugh Dyson, and how Lewis delivered his wartime talks to a traumatized British nation in the midst of an all-out war for survival.