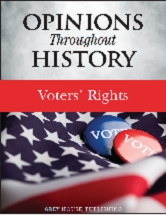 Opinions Throughout History: Voters' Rights provides readers with an in-depth exploration of not only the topic of voter suppression, but how public opinion influenced action on voters' rights, from the founding of the country, when most states limited the right to vote to property-owning males, to the establishment in 2017 of the Presidential Advisory Commission of Election Integrity, and beyond, to how voter suppression efforts affected the 2018 elections.