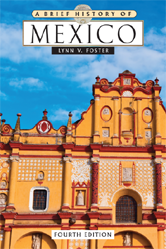 A Brief History of Mexico

A Brief History of Mexico

A Brief History of Mexico, Fourth Edition brings readers up to date on developments in Mexico, helping them understand the deeper significance of recent events. Since Felipe Calderon took office in 2006 amidst violent protests, his reforms have been aimed at drug cartels, poverty, restructuring the role of government in private businesses, and attempts to foster trade agreements with other nations. Despite the many obstacles it faces today, Mexico has become a democratic nation with checks and balances, free elections, and the ability to build a better future.