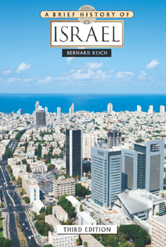 A Brief History of Israel

A Brief History of Israel

Israel is a modern country with a short history set into the lengthy story of Jewish history. A Brief History of Israel, Third Edition explores that history with an emphasis on the period since Israel's independence in 1948. It is a complex story of a people and their modern state, established thousands of years after the destruction of the old one. The story of the independent state of Israel is narrated against the backdrop of exile, anti-Semitism, Zionism, and the Holocaust--all of which have helped shape the nature of the current state.