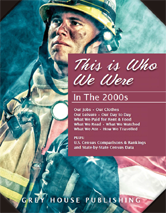 The This is Who We Were series provides the reader with a deeper understanding of day to day life in America during a particular decade. This new series is sure to be of value as both a serious research tool for students of American history as well as an intriguing climb up America's family tree. The richlyillustrated text provides an interesting way to study a unique time in American history.