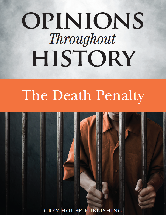 Opinions Throughout History: The Death Penalty

Opinions Throughout History: The Death Penalty

This volume of Opinions Throughout History looks at the evolution of this debate within the context of major events in the history of American criminal justice, from the nation's first execution, in the famed Jamestown Colony of Virginia, to the cells of America's modern death rows. Tracing this history through the courts, the legislature, and the academic, religious, and popular debates that have surrounded the issue, this volume will reveal how American ideas about execution have evolved and continue to change.