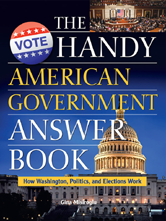 Filling the breach and answering basic questions about how our very complex government operates and what it promises, The Handy American Government Answer Book: How Washington, Politics, and Elections Work takes a comprehensive look at the historic development of the government, the functions of each branch of government, and the systems, people, and policies that comprise American democracy.