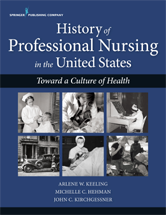 History of Professional Nursing in the United States

History of Professional Nursing in the United States

Grounded in the premise that health care can and should be promoted in partnership with communities to provide quality care for all, this history analyzes the resilience and innovation of nurses who provided care for the most underprivileged populations, such as slaves on Southern plantations, immigrants in tenements in Manhattan's Lower East Side, and isolated populations in rural Kentucky.