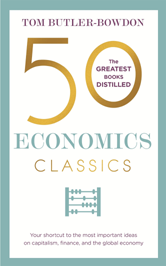 From Karl Marx to Naomi Klein, from The Wealth of Nations to Piketty's Capital, here are the 50 most important titles on finance and world economy distilled.