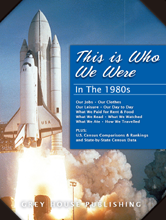 This new addition to the This is Who We Were series provides the reader with a deeper understanding of day-to-day life in America from 1980 to 1989. Readers will uncover how American life was affected by the fall of the Berlin Wall, the rise of the Computer Age, and Reagan-era prosperity and decadence.