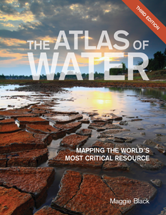 This vibrant atlas addresses all the pressing issues concerning water, from water shortages and excessive demand, to dams, pollution, and privatization, all considered in terms of the growing threat of an increasingly unpredictable climate. It also outlines critical tools for managing water, providing safe access to water, and preserving the future of the worlds water supply.