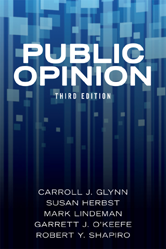 Public Opinion is a comprehensive and multidisciplinary examination of public opinion in the United States. Drawing on scholarship in political science, psychology, sociology, and communications, the authors explore the nature of political and social attitudes in the United States and how these attitudes are shaped by various institutions, with an emphasis on mass media.