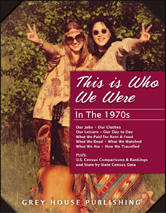 This is Who We Were: In the 1970s assembles a remarkable personal and realistic look into America's past. This new volume features nearly 30 profiles of people living and working in the 1970s, painting a complete picture of what it was like to live in America in this period. These stories portray both struggling and successful Americans from various economic classes, occupations, and regions across the country, capturing a wide range of thoughts and emotions.