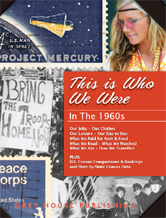 This is Who We Were: In the 1960s explores American life in the 1960s as a truly tumultuous and pivotal decade in the U.S.. Readers will uncover what life was like for ordinary Americans as they lived through a Social Revolution, the Civil Rights Movement, and the Vietnam War, all in the span of 10 short years.