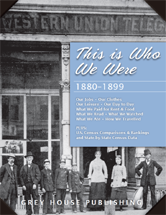 This is Who We Were: Post Civil War 1880-1899, provides the reader with a deeper understanding of what life was like in America after the Civil War and how it compares statistically to life today. Using original material from the Census, readers will find richly-illustrated Personal Profiles, Economic Data, and Current Events to give meaning and depth to what life was like in late 1800s America.