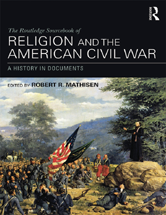 The Routledge Sourcebook of Religion and the American Civil War

The Routledge Sourcebook of Religion and the American Civil War

With chapters organized both chronologically and thematically, and highlighting the experiences of soldiers, women, African Americans, chaplains, clergy, and civilians, this sourcebook provides a rich array of resources for scholars and students that highlights how religion was woven throughout the events of the war.